<Back to News
Fall Play: Meet Some Cast Members

This year's fall play is Clue! We have many students working together to make an incredible show. This will be the first performance of the school year, so many people are excited for it to come together. This article will open with a few words from Mr. Henderson before moving on to the interviews with some of the cast to learn more about their perspectives on their roles and the show as a whole.

We asked Mr Henderson what he liked about the show and this is what he stated, "This show is based on the movie which was based on the board game. And the cool thing is when we had our first cast meeting, the first thing we did was we played the board game. This show is definitely not a recreation of the movie, it's its own thing and I am excited for it." Mr. Henderson also stated, "The show should be hilarious because we have such good actors and the script is funny but it's the actors that pull it all together and bring it to life."

We then spoke to some of the actors.

We asked Marley about how she feels about her character and this is how she responded, "I am honestly very excited to play Miss Scarlet. I wasn't expecting to get the role but I'm very grateful I did and I'm very excited for the show."

Lele told us a little bit about her character, "She's like an old lady who's very anxious and she's like the most quirky old lady ever and she's screaming all the while making everything awkward in a very fun way."

Will Thaler as Professor Plum:

Will talks about his experience in theater, and the students in the shows, "I'm most excited to get to know the new people in theater and work with some of the past people from theater. This might be the last show for some seniors, and I am very excited to have one last ride with them. This is by far the funniest show I have ever done in my opinion." He also tells us a little bit about professor plum, "My character is a physiological Professor and is very arrogant and holds himself higher than other people as if it's his own world and he's running it. One of his lines says 'it is a pleasure for y'all to see me.' This tells of his narcissism, he thinks he is better than everyone." 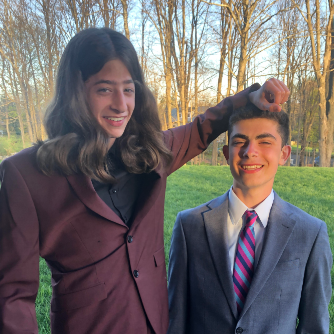 Joey has been doing technical theater for a couple years, and this is his first time acting and being on stage! Here's what he said about his role and the play. "I'm really excited to play Mr. Green. I feel like he's a good match for me. I'm really excited about trying something new. I usually do tech but this year I figured I'm a junior so why not act in the play, and I am also a big fan of acting. I can't wait to rehearse with everyone, all my friends who are actors and eventually do the show for everybody, and finally be on stage." Let's see what Joey thinks about Mr. Green. "Mr. Green is really anxious and he doesn't really want to be there. He is just like every time there's a corner, if he doesn't know what's behind him he's scared. He walks around a lot, he's really anxious and scared, and clumsy too."

Other cast members to watch for:

**Clue opens on Friday, November 11, and runs through that weekend and the following weekend.**