<Back to News
From General To General: An Interview with Brigadier General Bill Seely '85

One thing that everyone who goes to Wooster knows about the school is that whether it's the right fit for you or not, it is unlike any other place on earth. This plays true in our traditions (most recently DQ and Junior Move-Up), our community, and the people that bring these things into fruition: us, the students. We are what make this school what it is, and part of that has to do with how individual we all are while still upholding this strong sense of community between us. One day, whether it's sooner or later, we will all leave this place, and take ourselves (and this community) with us onto great things. While our lives after Wooster are yet to come, for alums, Wooster is already in their past, and yet the school still manages to affect their future. This rings true for a former Wooster General who has managed to bring what he has learned here into a massively influential job - Brigadier General, currently working in the Pentagon (yes, that Pentagon). 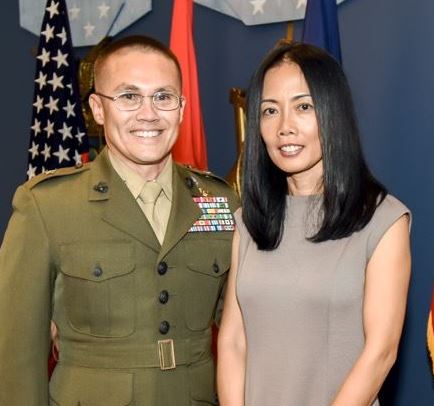 General Bill Seely with his wife, Nhung, at his promotion ceremony.

General Bill Seely '85, has made quite the name for himself since leaving Wooster. After studying at the American University in Washington, D.C. as an International Relations Major, he started working with the Marine Corps immediately - literally - and hasn't looked back. Graduating college on a Sunday and jumping into Marine Corps life on Tuesday of that same week, two days later, he has worked his way up in the world for the past thirty years, and has recently been given a job that very few hold, in a place where thousands long to work.

According to General Seely, the work he gets to do in the Pentagon is one of the most satisfying parts of the job. As the Director of Marine Corps Intelligence, General Seely oversees plans and policies that influence over 7,000 marines spread across the world, and he's extraordinarily proud of the meaningful impact this has on our country's operating forces. "The Pentagon as you can imagine, you may have seen in the movies, is a very very large place, with several thousand people actually working here. So it's always a buzz of activity, but the most satisfying part about actually working here is that decisions I make in regards to policy and plans really have a profound and positive effect on our operating forces. For those marines - let's say for example you're a marine out in California - something that I assign or approve here will take effect 'down the street' if you will, to those marines far away...I'm trying to make their lives better and easier in decisions at the Pentagon level." To give a better scope of how his authority works, General Seely compared his position to that of a dean, and less similar to a Senior Prefect, a position he fulfilled in his senior year at Wooster. "The dean doesn't command troops (senior and underclassmen workers), the Senior Prefect does, but the dean gives resources to the (job) captains and the proctors and the prefects."

The choice to put someone in the Pentagon is not one taken lightly. After a group of Colonel's are nominated for General, their names go through every area of government before being approved, including the President's office, which, at the the time of Seely's appointment, was held by former President Barack Obama. It takes a while for this list to get to the Oval Office, first decided by a selection board of Generals of anywhere between one and three stars, sent through a "chop chain" where Seely's record was reviewed by lawyers and various officers, transferred to another level of the Pentagon, and then finally sent to the Security of Defense, who delivers the nomination list to the President of the United States. If approved by our POTUS, the list is announced officially, before being sent off to the senate for finalized votes to take place.

Since being officially nominated by President Obama, a new president has taken his place, who happens to be at the other end of the political spectrum from the former. This, however, has no bearing on General Seely's work, or any other General, for that matter. "The selection (of Brigadier General) is very transparent with the transference of power, specifically Obama to Trump. Every time we get promoted at a new rank, we swear an oath to the constitution, not to a political party. The people I know take this very seriously. (Generals take this) so seriously that President Eisenhower, as I understand, through his entire military career never voted anyone for president. A lot of guys take it the same way: they have their private feelings, but they keep it private. We support and protect the constitution of the United States, and do our best to carry out orders. It's a good institution, and we do our best to be as apolitical as we can."

When it comes down to it for General Seely, his job is about one thing - the people, something that he learned at Wooster and took with him through his journey to the Pentagon. In fact, when asked what life advice he would give Wooster students today, he talked about just that: the people. Life is all about finding a higher purpose for oneself, General Seely told us, as well as finding a way to take that sense of purpose and use it to give back to the community. What he does today is so rewarding to him because he knows that the service he's doing is for his nation and for his community. "I had the same feelings when I was at Wooster - it is about the Wooster community. I still have those moments where I'm reading through the website and talking to my classmates, and (I realize that) those same feelings I had toward the school and the community have transferred themselves to the Marine Corps," he said to us over the phone, talking to us from his office in the Pentagon. He told us that if you have the inkling to give something back to the world or the people around you, the opportunities are endless. "If you're prepared and want to have a life of service, then one of the services is for you. Anything can be for you."

Brigadier General Seely came to Wooster in 1983 as a sophomore. During this time, Wooster was a boarding school, and Seely lived in both the "Arnold house" down on the football field, and later in the "East Cottage" boys dormitory.

At one point after our conversation with General Seely, Cosme spoke with the Wooster School expert, Mrs. O'Neill, to ask a few clarifying questions. He asked her where the East Cottage was, and she told him that it was the same cottage that is now called Wellington. McAllister used to be known as the West Cottage, and it was the girls dormitory. Also, she said that there was one house that was accidentally built ON TOP OF Wilson Field. She didn't say whether that house was Arnold house, but based on the fact that General Seely described it as being "on the football field", we would assume so.

General Seely was the senior prefect for the class of 1985. When we asked him about if and how his experience as senior prefect helped to prepare him for his position as Brigadier General, he had this to say:

This part of our conversation with General Seely was extremely fascinating, and made us realize how special of a place Wooster is. The beliefs, philosophies, and values of self-help and service towards one's community that have been passed on through generations of students are essential aspects of Wooster life. These things expose students to a positive work ethic, and shape Wooster students into who they become once they have graduated. General Seely is a perfect example of a product of the values that Wooster teaches. 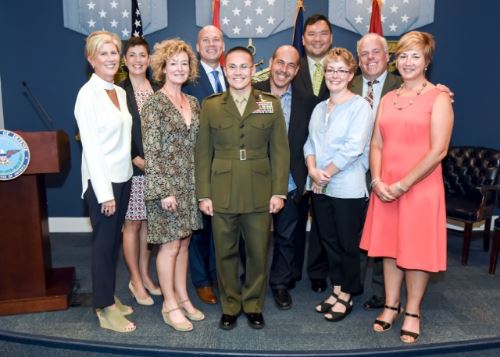 It was an honor for everyone involved in writing this article to speak with General Seely. We thank him greatly for taking the time out of his very busy day to speak with us, as well as thank him for his service to the nation.

Thank you to Mrs. Costigan and Mrs. Thaler for organizing and arranging time for our discussion over the phone!

Thank you to Mrs. O'Neill for answering questions about the way campus used to look!