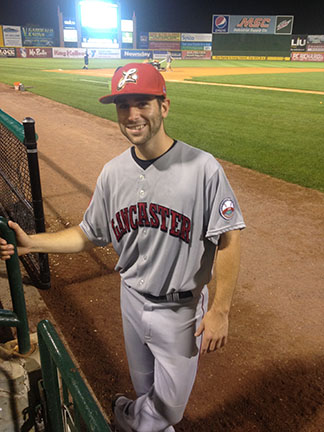 Jordie Scheiner ’09 is among the most decorated baseball players to ever put on a Wooster School uniform. He earned All-League honors during all four years, he won the team’s Most Valuable Player award in both his junior and senior years, and he was the recipient of the Alvah Jessup Outstanding Athlete Award at graduation.

Jordie was recruited to play baseball at Division III Colby-Sawyer College and it wasn’t until his sophomore year that Jordie began his pitching career. He quickly became a fixture in Colby-Sawyer’s rotation, which was ranked #1 in the nation for fewest walks allowed. While developing a variety of pitches, his area of focus was the knuckleball.

During the summers of his sophomore and junior years, Jordie played for the Torrington Titans in the very competitive Future Collegiate Baseball League - a league comprised of mainly Division I and Division II players who were recruited from across the nation. Jordie’s pitching garnered interest from several professional organizations, including the Los Angeles Dodgers and Cincinnati Reds, and he was invited to several training camps. In this same time period, Jordie met and worked out with some of the best major league pitchers in the game today, such as Tim Wakefield and R. A. Dickey.

Jordie returned to the Torrington Titans after graduating college, but this time as a coach. In mid-August, a few weeks after his coaching career began, Jordie was contacted by Butch Hobson, former third baseman and manager of the Boston Red Sox, who was coaching the minor league Lancaster Barnstormers. Coach Hobson invited Jordie to a bullpen session and inked him to a contract on the spot. To date, Jordie has pitched in one inning - he picked up his first strike out and his first broken bat.

We are proud of Jordie’s accomplishments and wish him continued success.